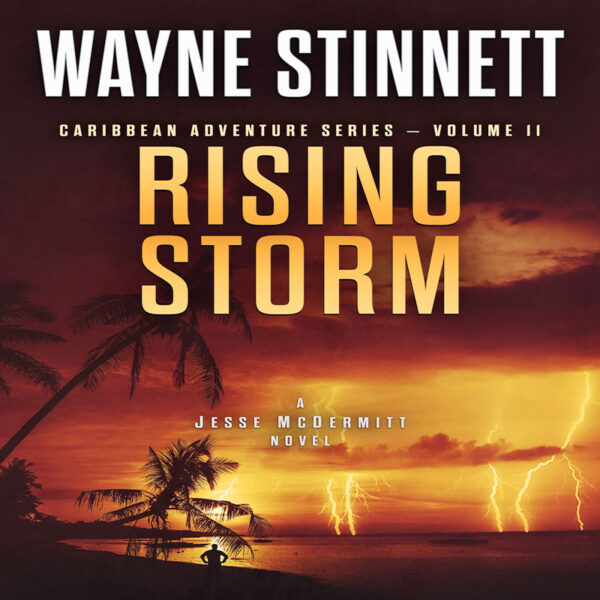 Rising Storm by Wayne Stinnett is the eleventh book in the Caribbean Adventure Series featuring the character Jesse McDermitt. Get hooked on the entire series and dive into a Florida Keys adventure with everyone’s favorite retired marine turned charter boat captain.

Miles from the laid-back lifestyle of No Name Key, and just shy of the raucous nightlife of Miami and South Beach, lies Coconut Grove, a tropical oasis with a distinct Bohemian flair. Lately, a seedy underside has emerged along the Grove’s waterfront, preying on adventurous young women.

Somewhere amid all the glitz and glamour, hides a thief who stole a fortune in Aztec emeralds. Or did he? Jesse McDermitt must first determine if the victim herself is a thief. The trail of clues leads him to evidence that the thief may be involved in a string of more heinous crimes.

Jesse and Chyrel enlist the help of the recently returned Charity, and the trio go “undercover” at a floating swinger’s party headed for the Bahamas, which may well be a front for torture and murder.

When a sudden violent storm strikes Stiltsville, Jesse finds himself alone on the ocean, trying to recover the treasure and put a murderer behind bars—but first he must win the battle with Mother Nature.

Be the first to review “Rising Storm” Cancel reply