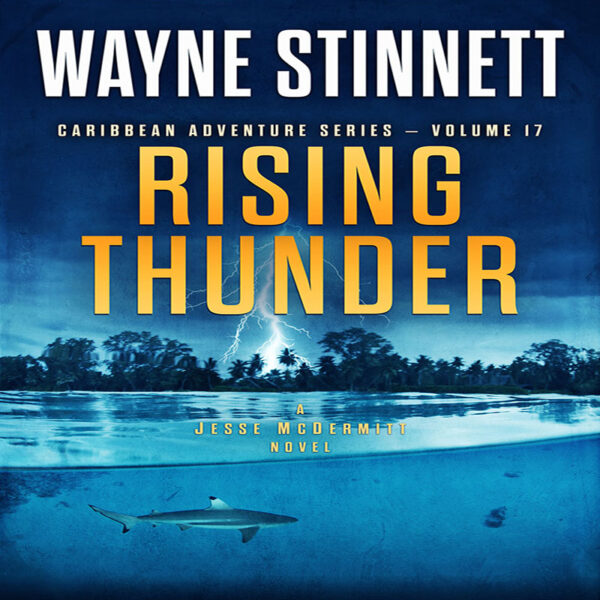 Rising Thunder by Wayne Stinnett is the seventeenth book in the Caribbean Adventure Series featuring the character Jesse McDermitt. Get hooked on the entire series and dive into a Florida Keys adventure with everyone’s favorite retired marine turned charter boat captain.

Paradise isn’t always what it’s cracked up to be. Few people know this as well as Jesse McDermitt, retired Marine and former government operative.

In the aftermath of an intense mission in coastal Mexico, Jesse wants nothing more than to get back to his boat; to just sail away and forget all about the firefight and his warrior past.

The Caribbean sun is warm, the azure water inviting, he has the woman of his dreams at his side, and everything seems to be smooth sailing.

Until a severed leg is found tangled in a line securing Jesse’s dinghy to his 61-foot sailing yacht, Salty Dog. The former owner of the appendage turns out to be the eighth victim of a lunatic who kills for money and a former Russian smuggler who won’t pass up a chance for one more big score.

Jesse is forced to don the warrior’s mask once again. This time to catch a ghoulish killer who is stalking the villages and jungles outside Belize City.

Be the first to review “Rising Thunder” Cancel reply