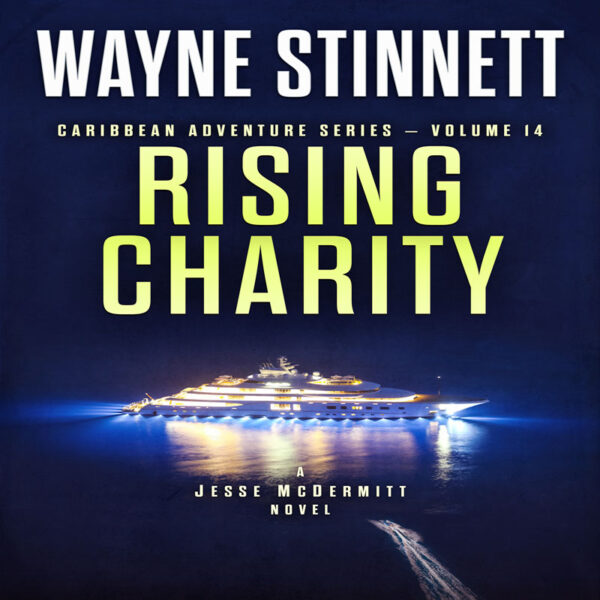 Rising Charity by Wayne Stinnett is the fourteenth book in the Caribbean Adventure Series featuring the character Jesse McDermitt. Get hooked on the entire series and dive into a Florida Keys adventure with everyone’s favorite retired marine turned charter boat captain.

It’d been a long time; a lot of things had changed. Since sailing away from Cane Garden Bay, Jesse McDermitt had changed.

Waking one morning, the smell of rum still on his breath, Jesse realizes he doesn’t much like the change anymore. The mask which he’d freely put on didn’t fit right. It was the mask of a drifting, womanizing, boat bum, and it concealed his inner turmoil. Peeling off the mask, he soon realizes what a mess he’s in.

Weeks of rigorous, open-ocean swims and increasingly deeper free dives, help put the strength back in his body. But physical strength wasn’t what was lacking. It wasn’t what had finally pulled him into a lifestyle that wasn’t his. He’d lost focus on the important things in life, the need to be part of something better.

In a secluded anchorage, far from civilization, Jesse powers up his satellite phone for the first time in weeks. There is a message from Charity Styles, asking him for a meeting. She has a line on something they both need, something to focus on. A mission.

From award-winning story-teller Wayne Stinnett, comes this 14th novel in his exciting Caribbean Adventure Series. Taking the reader from the deep-water canyons of Exuma Sound to the sport-fishing Mecca that is Bimini, Stinnett spins a fascinating tale of redemption and vengeance.

Be the first to review “Rising Charity” Cancel reply