A number of readers have questioned the size of Jesse’s island in the Content Keys, just north of Big Pine Key, asking if it was possible to build all the structures on such a tiny island. There are four buildings; Jesse’s house, the two bunkhouses, and the caretaker’s house. All four are identical on the outside, measuring 50′ by 20′, or 1000 square feet of living area. The caretaker’s house has a small porch on the west side and Jesse’s house on stilts has a deck around the north, west, and south sides. These are small houses. Now, consider the average neighborhood with moderate sied 2000-square-foot homes built on the average quarter acre lots. That’s eight 2000 square foot houses on two acres, where Jesse has half as many and they are half the size. Now consider an NFL football field. It measures 160 feet by 360 feet, including both end zones. Jesse’s island is equal to about two NFL football fields. Suddenly, two acres doesn’t seem so small.

Jesse’s island is a real place and its location is precisely described in my books. The island where Jesse’s fictional home and compound are located measures about 300 feet by 400 feet. This is roughly 2.75 acres, or 11 neighborhood lots. Of course, the island is irregularly shaped, so Jesse uses the approximation of “two acres at low tide.”

The sketch below was made using an actual aerial photograph of the island, taken by author Steven Becker, coupled with the island’s known dimensions from satellite images, to get the buildings I described to the artist to the same scale as the island. A Huey can easily land in the center of the island. I know, because I was the one who left the fire ring there which Jesse found and uses to this day. When I lived in the Keys, I spent many nights on this unnamed island. The first night wasn’t very pleasant and the bugs chased me back to the boat soon after sunset. That was why I took a fire ring out to a deserted little hunk of sand and mangroves. With even a small fire burning, the bugs were attracted to it instead of my warm skin. The result was pleasant for me. Not so much for the bugs.

So, just where is Jesse’s island? From Old Wooden Bridge on Big Pine Key, it’s 9.3 miles to the northwest. But that’s just to give you an idea of the location, to get to it by boat, your bow will have to point in a lot of directions to navigate through the Back Country. The precise location is 24°47’21.8″ North and 81°27’07.4″ West, or 24.789396, -81.452041. If you happen to have nautical chart #11442 handy, or can view it online, Jesse’s island is located just below and to the left of the letter H in Harbor Channel, up near the top of the chart. The number 26, just to the east of Jesse’s Island is a deep hole in Harbor Channel, always good for lobster and grouper. 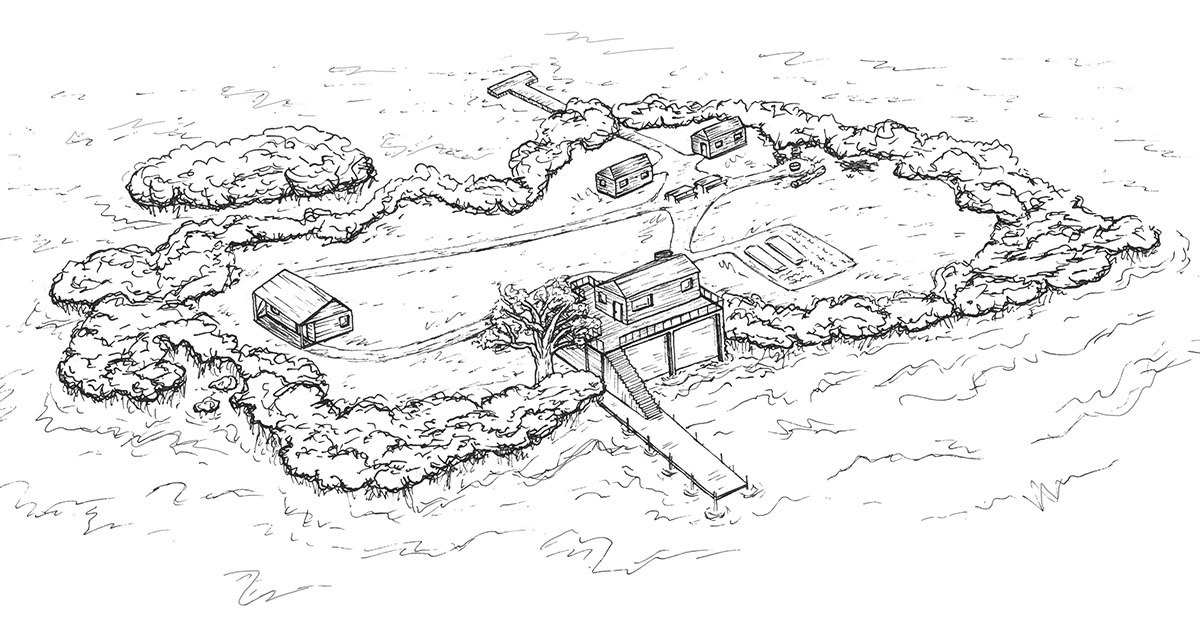 Actually, my house is little more than a shack on stilts. Just over a thousand square feet with a large combination living room, dining room, and kitchen in front with a bedroom and head in back. It’s solid and keeps the summer rain and winter wind out. As far as solitude it’s better than sleeping on the boat, though not nearly as luxurious. I’d built this place by hand on an island in the Content Keys, northwest of Big Pine Key.

This group of islands is mostly uninhabited scrub and mangrove covered swamps and sand bars. When I retired I’d used up nearly all my savings, which I’d scraped together over twenty years in the Corps, supplemented it with my inheritance from my grandfather about six years ago, and bought my boat, Gaspar’s Revenge, and this tiny island. It’s no more than two acres in size at low tide. It has no beach and the water around it is so shallow you can walk to any of the neighboring islands and not get your shorts wet.

It took me a whole winter and spring to dig the small channel from Harbor Channel, just deep enough for my little skiff to get to the island. There I’d carved out a part of it and spent all summer building my stilt house above the channel. I’d planned to make the channel wide enough and deep enough to get Gaspar’s Revenge through it, but it proved to be too much work to do by hand. One day I’ll rent a dredge and do it, but for now I’ll keep running back and forth in the skiff.

I’d gone up to the commercial docks in Miami during that summer and scrounged through the discarded piles of pallets and lumber. There were lots of it from South America and I managed to find plenty of mahogany planks and quite a bit of discarded lignum vitae posts along with other hardwoods, rare in the states, but plentiful down there.

The exterior siding on my house is mostly mahogany. The roof is corrugated steel I’d scrounged from the Naval Air Station in Key West when they’d torn down some of the old Quonset huts that had been there since before WWII. The floor is fourteen feet above the narrow channel at high spring tide, just enough room for the Revenge. The floors, studs and beams are solid lignum vitae. My little house could withstand anything Mother Nature could conjure up. 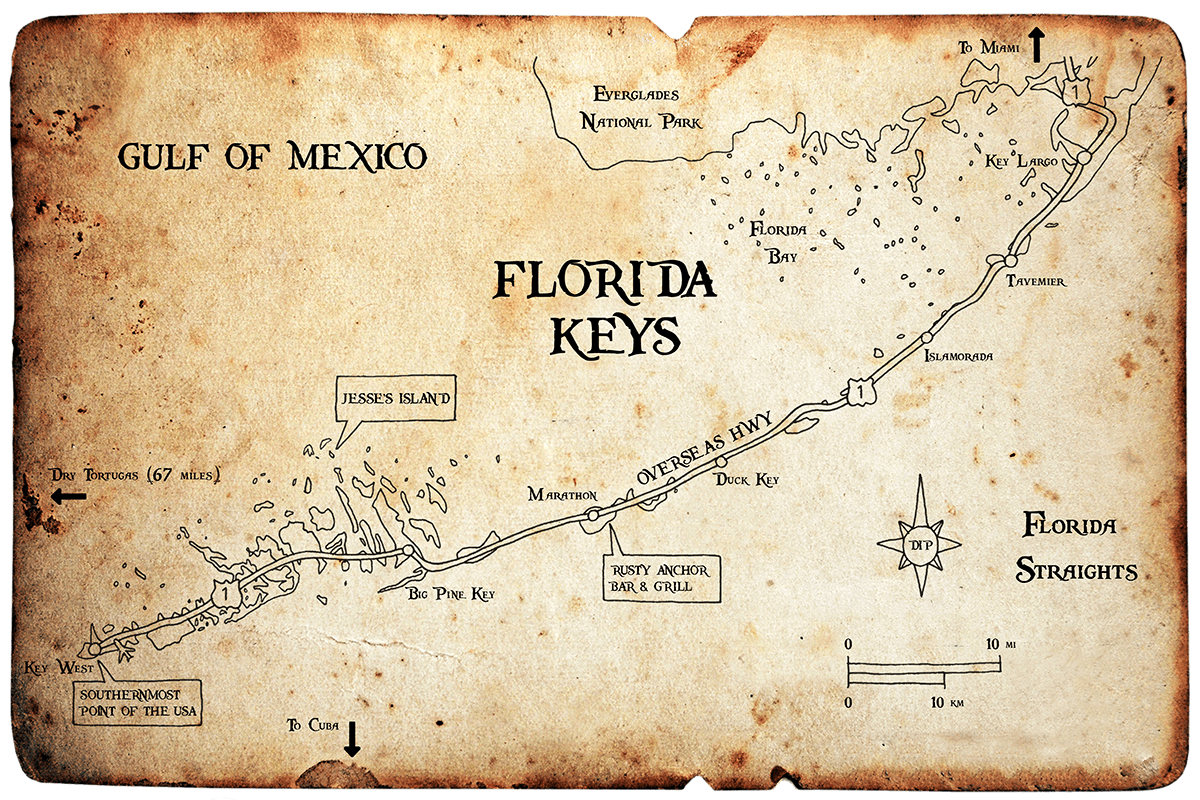 A few authors whose books might be found aboard Gaspar's Revenge 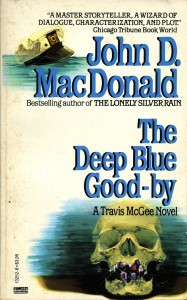 For me, this is where it all started. John D. MacDonald wrote 21 novels in the Travis McGee series. This is his first. Written in 1964, much of MacDonald’s musings on the over development of south Florida and the Florida lifestyle throughout the series, are still applicable today. I have every one of the 21, all well-worn, after many readings. Imagine my disappointment when, at 16, I drove to Bahia Mar Marina in Fort Lauderdale and found that there was no slip F18 and no boat named the Busted Flush. 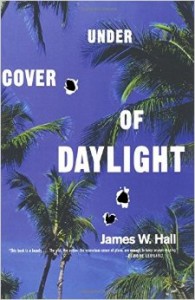 Under Cover of Daylight
By James W. Hall

James W. Hall is one of my all-time favorite Florida writers. He has the ability to make the reader see Florida as it is today, with all its development and problems, but to also see it as it once was. This is his first novel in the “Thorn” series. There’s quite a bit of Thorn’s dna in my main character, Jesse McDermitt. 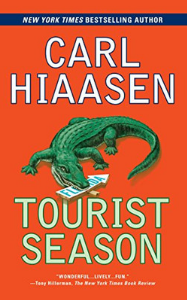 Carl Hiassen develops characters like nobody else on the planet. They’re strange, quirky, and sometimes just plain frightening. Imagine a man with an amputated arm that uses a weed whacker for a prosthetic, or a one eyed ex-Governor of Florida who lives in the swamp and eats road kill. Tourist Season is a great place to start. 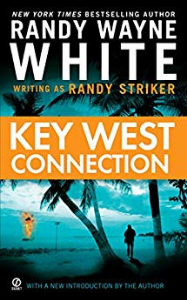 Randy Wayne White is the best-selling author of the very popular Doc Ford series. Sanibel Flats is the first in that series. But, if you want to see his earlier work, check this one out. I first found this series in the early 1980s, before I ever wrote the short stories that later became Fallen Palm and Fallen Hunter. My main character, Jesse McDermitt, has a bit of Dusky MacMorgan and Doc Ford in him. 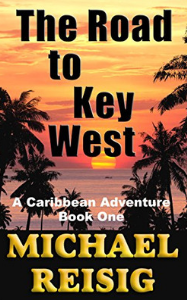 The Road To Key West
By Michael Reisig

Michael Reisig is an independent author like myself. His books are some of the finest I’ve ever read. He can create sceneries with words in the readers mind that is as vivid as any photograph. Michael helped me along as I was writing my second novel. This is his first book in the Road to Key West series. 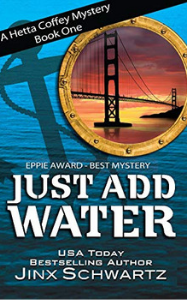 “Hetta Coffey has a yacht and she’s not afraid to use it.” Jinx’s Hetta Coffey series is one of my favorites. Hetta gives up her landlubber ways and joins the cruising set, south of the border in the Sea of Cortez. But, not before finding her ex literally poached in her hot tub and losing the only one that ever loved her unconditionally. Her dog RJ. You can call me Ray or you can call me Jay, or you can call me RJ, but you doesn’t have to call me Johnson. A really fun read, with a nautical flair. 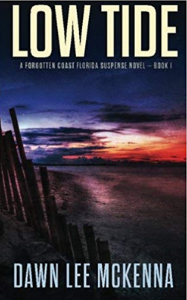 I was first introduced to this author in an online forum for writers and out of curiosity, I bought her first book, a romance. A fantastic story, but lost in the vast sea of that genre. She’s since turned her talent toward suspense. Being a native Floridian, she set her new Forgotten Coast Series in the panhandle of the Sunshine State, which means I devour them when they’re published. Take a little trip with Dawn down to Apalachicola. You won’t be sorry. 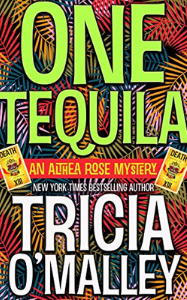 One Tequila
By Tricia O'Malley

Tricia is another newcomer on the Florida suspense scene, but has a long track record in other genres. This is her first book in what promises to be a fun series to read.