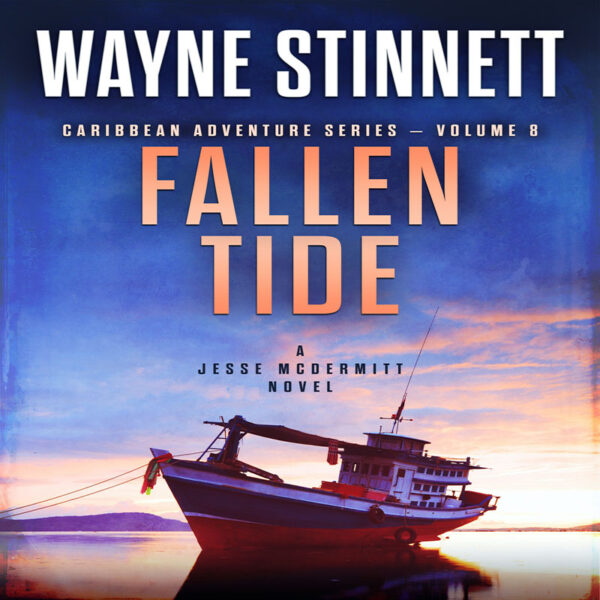 Fallen Tide by Wayne Stinnett is the eighth book in the Caribbean Adventure Series featuring the character Jesse McDermitt.  Get hooked on the entire series and dive into a Florida Keys adventure with everyone’s favorite retired marine turned charter boat captain.

Coral branches rarely wear a wristwatch. That was Jesse McDermitt’s first thought when he found a partially denuded human arm, teeming with crab, lobster, and fish life, during his morning ocean swim.

The discovery of a drifting mega-yacht the following day while fishing the Gulf Stream, causes quite a stir among the many alphabet agencies of the federal government, not to mention one shaggy canine.

A severed leg and two whole bodies are discovered aboard. The find links the disappearance of the yacht’s owners to the arm Jesse found twenty miles to the north, near his home in the back country of the Florida Keys.

Black marketers from Eastern Europe have set up a base of operations too close to Jesse for comfort. The rescue of the yacht-owners takes on national security importance, but it’s even more important to one of Jesse’s closest friends.

High speed boats and planes race across the Gulf Stream, causing the Cuban Air Force to become nervous. Will Jesse and his crew reach the victims in time?

Be the first to review “Fallen Tide” Cancel reply