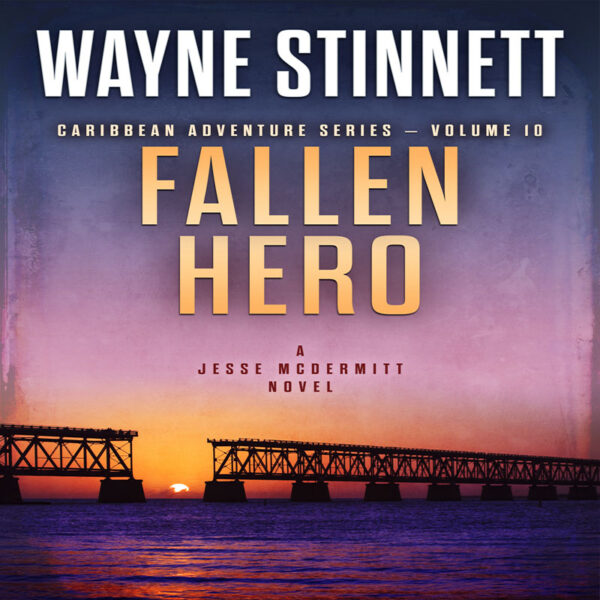 Fallen Hero by Wayne Stinnett is the tenth book in the Caribbean Adventure Series featuring the character Jesse McDermitt. Get hooked on the entire series and dive into a Florida Keys adventure with everyone’s favorite retired marine turned charter boat captain.

A young treasure diving couple is sadistically murdered in the back country of the Florida Keys—and Jesse McDermitt’s friend is the prime suspect.

The reclusive federal agent and former combat Marine launches his own investigation in the face of overwhelming evidence. McDermitt is certain of his friend’s innocence.

When a third victim’s body is discovered lodged among the mangrove roots on Knockemdown Key, the race to stop a serial killer begins. The beautiful Detective Devon Evans will do anything to apprehend the killer before he claims another victim.

With shifting political winds, McDermitt and his friends must improvise and adapt to the ever-changing tide. There’s more than meets the eye in this tenth novel in the Jesse McDermitt series!

Be the first to review “Fallen Hero” Cancel reply

Any cookies that may not be particularly necessary for the website to function and is used specifically to collect user personal data via analytics, ads, other embedded contents are termed as non-necessary cookies. It is mandatory to procure user consent prior to running these cookies on your website.